“Behold the turtle. He makes progress only when he sticks his neck out.” – James Bryant Conant

That’s what I’m trying to do right now. In fact, I even bought this little book from Urban Outfitters.

I saw it and went, YES! This is quite possibly exactly what I need!

The catch is, I’m not nearly organized enough to actually sit down and fill out a book like this. You’re supposed to fill in the date and answer the question they’ve given on each page and let the quote on said page inspire you. Will I keep up with it? Hopefully.

I’ve already been doing a lot lately that scares me. It hasn’t been on purpose. So I’m left wondering… does this whole idea of living life to the fullest have to be intentional? Or does it count just as much if what you’re doing is leaning on the edge of survival instincts?

The first page asks you to fill out a list of things that scare you. I can only think of a few things.

1) Creepy people (mostly men). Which is why I walk around with a knitting needle in my purse. Think about it… it’s probably the best unassuming weapon a girl could have on her.

2) Being late. Which is why I am usually 15 minutes early to everything. I like to scope out where I’m going, get there early, and possibly wait in the car and read.

3) Letting life pass me by. I’m only 24, but sometimes I wonder how the heck 24 years of my life have already passed. I wonder if I should have accomplished some huge goal by now. I wonder if I’ve made the right decisions.

4) Books about a really horrible future for mankind. AKA, Brave New World, The Road, 1984, The Hunger Games, Farenheit 451… just to name a few. I’m terrified that these stories might come true. Even if not for me, but for the future generations. Which is partly why I refuse to have a smartphone. (yes, it’s true)

5) Too much technology. I really like getting back to the basics. I’ve written about it before, but I prefer not to have a smartphone, a microwave, television, or get online very often. I get paranoid about “them” controlling us and having access to our every move and choice. I prefer to use an oven or stove to heat up my leftovers. I prefer a book over a TV show. I prefer writing letters to text messages. I don’t think all technology is bad, just like I don’t think ALL of Western medicine is bad. But I think enough of it is to be wary. Sometimes I feel like I can literally feel my brain turning to mush….. unless I read all day long, then my brain returns to its normal state.

That’s just the tip of the ice burg, but those are the first 5 fears that came to mind.

In the next weeks I’ll be sharing what SCARY thing I’m doing each day and how I felt about it. In the meantime, I’d love to know your biggest fears and how you plan to overcome them… or how you’ve already overcome them in life.

Now, along with fears, I have a good friend who reminded me that it also takes courage to do something you ENJOY every day. He said, “Why not also try to do something for yourself each day. Maybe that would be even better.”

I’m all for a happy medium.

I’ll try to share the little joys I find each day, too. The most recent joy I had was watching my sister’s band play at the Biopark here in Albuquerque, and having my nephew Carson on my lap the entire time. We listened to the music, danced, and wound up playing “star wars” with light sabers (aka twigs) and laughing.

As always, thanks for taking time to stop by Hey Lou!!!! 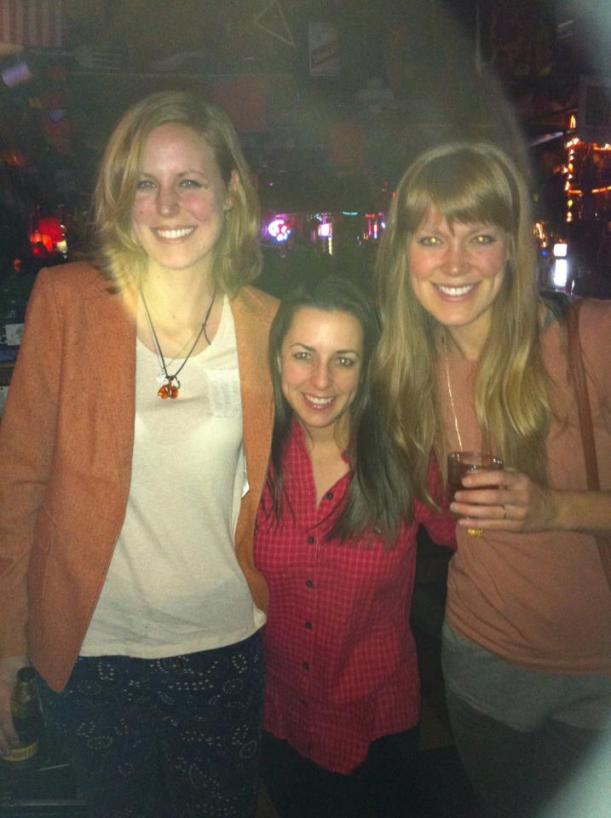 sometimes feeling like a giant can make me uncomfortable… but at least I have my twin. (Meredith, sister-in-law Melissa, and Me)

Well, now!! There are a few things. (Being taller than everyone actually stopped making me uncomfortable a long time ago. You just get used to it when you grow to your full height of 5’11 in 8th grade.) First off, I’ll tell you the OCD-type things that make me uncomfortable. They’re ridiculous and I can’t explain it.

Counter-clockwise circles. They make my head hurt! If I run around a park, I’m going clockwise. If I stir milk into my coffee, my spoon is going clockwise. Don’t ask me where this originated. (but there’s a good chance it could have been something to do with playing tetherball in elementary school)

Left side, wrong side. Stepping on cracks or “first” steps with my left foot makes me uncomfortable. It’s like a points system. My right foot needs more, so I step on cracks and begin walking up stairs with my right foot, always. I like everything to be on the right side. If I ever get tattoos, they will most likely only be on the right side of my body. I know. I’m strange, I guess.

Those are the most odd examples. Now moving onto more everyday, social-ish, type situations that make me uncomfortable:

Political debates and/or weird or rude political comments. Dude! Seriously. Get off your high horse for one second. I can’t stand disrespectful or sweeping statements by either party. One time I helped a customer, who presumably thought I was a liberal hippy who wanted to make his life miserable (which I’m totally not), who added to every response he gave me, “… because I’m not a democrat.” It was weird, folks.

Me: Can I get you an extra bag?

Him: Sure, because I’m not a democrat.” (me ignoring this)

Me: Can I offer you a slice of bread?

Him: No thanks, because I’m not a democrat. (me raising my eyebrows, but continuing to ignore this)

Honestly, I don’t know why he was saying this or what the point was. All I know is he was saying it in a tone that was anything but nice. It was easy to ignore. I didn’t take the bait, whatever that bait was supposed to lead me to. Replace the word “democrat” with “republican” and I would have felt exactly the same way. Just leave me alone! At this current point in time, I wouldn’t call myself either.

My “political status” on FB says:

Show me a politician who wants to eliminate GMOs and Monsanto, and you’ve got my vote. Where is he/she?

And that’s all I’ll say about that!

People who use very big words in conversation. I studied English in college, too. I was never one of those kids in class who raised my hand, only to confuse the other students, and quite possibly the professor. Layman’s terms.

Seeing a couple argue. Like really argue… not just bicker. It’s weird and not for the public to see.

People who won’t look me in the eye. OR people who stare into my eyes. I guess there’s some kind of social norm of eye contact somewhere in the middle. I think it’s important, but I’ll probably look away and/or sweat if you gaze at me while we’re talking. I’ll really wonder what I’ve done wrong if you don’t look at me at all. What’s on the ceiling?

When dogs play. Probably a good reason for me to never own a dog. I hate it when they “play” and it looks like they’re going to eat each other. I’m that annoying dinner guest cringing and asking, “Um, is everything going to be okay?”

Other than that I really don’t get uncomfortable all that often. I can deal with a lot. I can handle rudeness of sorts and people who are just plain odd. I’m also not afraid to politely ask a friend to stir their spoon the correct way. Don’t be surprised if I do this to you.

There you have it!

TGIF and have a great weekend!