For my birthday I gave myself something I have been wanting for years. Years.

I hinted at this in this post, and have had a few people ask me what my gift to myself said. Well, here you go.

I have a slight obsession with tattoos. (YES, I SAID TATTOO!) I love them. I ask people about them… I always want to know the story behind a tattoo. Sometimes the story is simply,

That, in and of itself, is a story. The tattoo reminds its owner of the time and place where it was painfully inked into their skin. The tattoo cannot be erased. (Unless you’re super rich and get that laser removal. But I’m talking regular folks, here.)

SO! After years of wanting a tattoo, admiring the tattoos on others and accumulating my future list of tattoo ideas, I finally got one.

And it was spur of the moment. Just like this. And this. If I get an idea, I usually go with it.

So on July 30th, the day before I turned 24, I decided to get a tattoo. When I woke up that day I had no intention, by the way. I wound up going to the tattoo parlor by myself, while those closest to me were at work or otherwise engaged, and I sat alone while the guy with the huge beard inked my arm. It hurt, but not nearly as bad as I expected.

Greg said that this year (of my age, 23) was a year of growing. I couldn’t have agreed more. It was a year when I grew as a person, “grew” some baby chicks, grew some plants, and we most certainly grew as a couple. In fact, I had no idea such changes were in store for me. 23 was one wild ride of an age. However, I was ready for it to be over. I was ready to be 24. 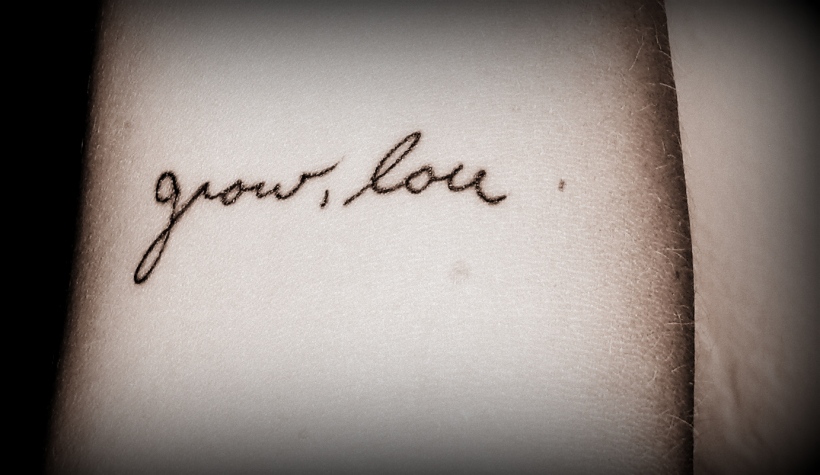 I had it placed in a spot where I can see it every day. It’s facing me so I can read it. I can hear Greg saying, “Grow, Lou,” in the most sincere voice… having already loved each stage of my life, the good and the bad. I already know that whatever I grow up to do or be, Greg will still be telling me the same thing.

And it’s what I want to tell you all, too.

Wake up and do something spontaneous. Get a tattoo! Cut your hair! Write a book! Break up with that jerk! Tell that lady at the coffee shop how much you’ve LOVED her all these years….. do something. For goodness sake….

And don’t wait for someone else to water you. (Okay, that was cheesy.) (But true.)