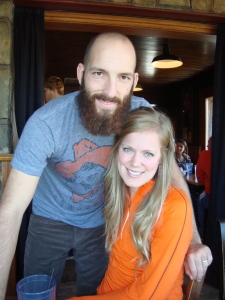 {This was not a weekend trip to write, read, or eat healthy food… all of which I usually do on a daily basis! This is purely about football, chili cheese fries, and bright orange.}

Okay, I’ll admit it. I’m not much of a football fan… I don’t like watching it on TV and I don’t understand half the rules (I know- I sound like a painfully typical gal.) HOWEVER, when it comes to Oklahoma State University, I am now a fan by marriage. I say that not because I don’t actually like the team, but because I literally probably wouldn’t even have heard of them if it hadn’t been for Greg’s family. His parents went there, his brother went there, and the entire family has been going to the Homecoming games every year since before Greg can remember.

I have been going to games since I was 18. This year was my FIFTH Homecoming trip. (and I’ve been to at least three other OSU games)

My first time in Stillwater was fun, exciting, and intimidating. The entire town was wearing orange and I, somehow missing or underestimating the “EVERYONE WILL BE IN ORANGE” memo, was wearing a blue shirt. It was one of my first times with Chris and Melissa, Greg’s siblings, and I was overwhelmed. There was more than one moment when I turned to Greg, told him I needed a hug, and started crying in the middle of the grass on OSU campus. I think he was worried about what kind of girl he had taken on the trip. His family is not full of criers, and I cry quite a bit. 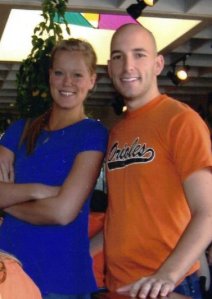 THE blue shirt. I cried about five minutes after this picture was taken. 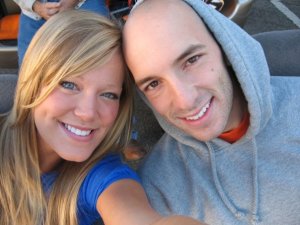 This time of year and going to the game has become a tradition for me and something I really look forward to. Stillwater is a cute little town and I love Greg’s family. It’s amazing how time flies. When I was seventeen I already knew I’d be marrying this funny bald guy… so I am not surprised that this is my sixth year as a Poke fan. However, it is crazy how fast it all went. I didn’t really have a grasp on what we would look like (figuratively and literally!) at this point in time.

College is over, I’m trying to be a writer, Greg is in a cool band, and life has never been better.

Turns out, life just keeps surprising us. I’ve let things slide that I never thought I’d be able to. I’ve taken risks than turned out to work really well in the long run. I’m a completely different person than I was on that first Homecoming trip. Greg is, too.

The thing that is most similar is how much we laugh!!! I swear. It’s the number one reason why I married him :) but enough about that…

ANYWAY- this year was so fun. The Pokes won!

In the stands watching the game!! Melissa, me, Greg, and Chris :)

We all got to hang out and have a good time!

Before some horrible shots were passed around…

We ate some delicious food! (I didn’t let myself feel like crap for eating entire pizzas, bunless [I do gluten free!!] fried onion cheeseburgers, chili cheese fries/tots, and ice cream. I simply ENJOYED it. It tasted damn good, too.)

(Chris, pictured here, is the one who introduced A Prayer for Owen Meany into my life. We bond over a few drinks and talking literature. He’s the best! I will be forever in his debt!!)

Chris and the Lous!!! Eatin’ some Eskimo Joes

I have the funniest husband in the world.

I got to hang out with my hilarious and amazing sister (in-law) Melissa, aka Melissy, aka Billy pop, aka Bills

And best of all… I finally had an entire wardrobe of orange to take along with me. It was my most successfully orange year, in fact.

my father-in-law Frank. Biggest OSU fan on the planet!!!! He always wears orange.

Going to the games has given me a good perspective on relationships and accepting the fact that we all have very different interests. Just like I’ve mentioned before, I hate the word “let” in a relationship. I don’t “let” Greg watch the games every week with his dad, I like it when he does. When else can he scream like a maniac, bond with his dad, and have pure guy time? This is the best outlet. And the game? I can get just as into it in person. Yup. If I’m there and in the stands, I can cheer and yell and high five along with every other Williams (oh, and every other Poke fan, too!). It’s FUN. It’s fun to get into something that I otherwise would never have had an interest in.

Because it’s not all about me. It’s about Greg’s interests, his family, my family, bringing our traditions together, and having a good time!

Bonus: I didn’t even cry this year. 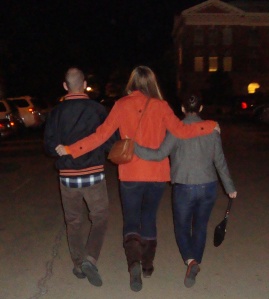